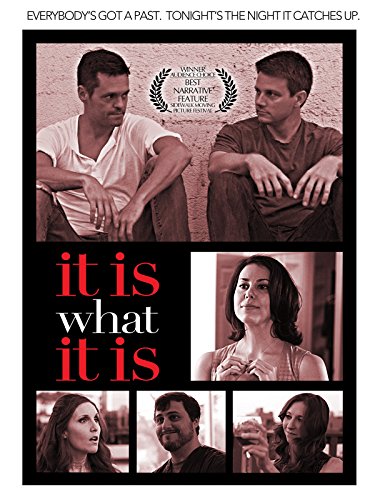 With the 17th annual Sidewalk Film Festival coming up this weekend in Birmingham, take some time to watch last year’s Audience Award Winner – It Is What It Is, from director Mike Cunliffe. It’s now on Amazon Instant Video.

Cunliffe also acted in the film Death to the World, which is also on Amazon.

If you’re attending Sidewalk this year, be sure to check out some films made by some friends of mine. Look for screenings of Little Cabbage, Dead Saturday, and For a Few Zombies More.

There will be more news coming soon about a couple of other film-related projects, but in the meantime, my friend Somica Spratley is working on her film Without Obsession, and she has a fundraiser going on IndieGoGo. Click here to check that out.

And the crew from Foolish Henry Films (Death to the World, City Federal) have started pre-production on a new project. More soon…

This. I get it. Mr. da Vinci is correct. But I think I sometimes take it a step further because I also look at end results, produced work.

So many times it feels that no matter how much I’m trying to do, or how many projects I’m working on, it’s never enough. I should be doing more. (How many hours am I losing to this sleep stuff, right?)

In fact, I just looked at the date of my last blog post and then looked at my calendar to see what I’ve done, you know, other than not update this thing. I’ve been busy, but I can be busy and still feel as if I’m standing still.

I’ve played some shows, traveled out of town a bit, done some filming, some photography, writing and pre-production on a project, seen a play (Smoke on the Mountain at the Wetumpka Depot), hung out with friends, tried new beers, learned how to make homemade flour tortillas…

I’ve got film footage and photos to edit and preparation for a handful of other projects in the works, but there’s a disconnect. I still ask myself what I’m doing?

But hey, that’s not really even what I had planned on writing in this post, but there it is. Check out that stream-of-consciousness right there. But yeah… I guess just focus on the “projects in the works” part and know that there is stuff on the way.

In other news, I’ll be back at the Recovery Room in Dothan this Friday, playing with my friend Mike VanDusen. Starts at 9. No cover.